Well done to our certificate winners for all your hard work this week. In English, we have continued with the play 'Rhiannon's Misfortune' and we have looked at creating compound and complex sentences. In Maths, we completed a reasoning problem about area and perimeter. We also started learning about multiplying by 10, 100 and 100 ready to convert measurements next week. In RE, we continued our topic 'Building Bridges' which is all about the sacrament of reconciliation. Lastly, in Context, we made our buzz-wire games and had lots of fun trying to solve the problems we had. It worked in the end!

In Maths, we have continued to learn about time on an analogue and 12-hour digital clock. In English, we planned our persuasive letter. In Context, we completed a practical activity where we needed to test good conductors and bad conductors in an electrical circuit. In RE, we learned about Paul's journey spreading the Good News of Jesus.

The children enjoyed their last week of swimming lessons, they had a great time! In Maths, we continued to work on time and being able to read times from an analogue clock and write them in words. In English, we looked at the features of persuasive writing and wrote our own examples linked to Lottie's Diary. In Context, the children were locating faults in electrical circuits.

In English, we have been learning about children working down the mines and focusing on 'Lottie's Diary'. The children wrote a description and empathised with a character. In Maths, we have started recapping money and time in our new maths set. In Context, we started our new topic which is 'Current Trends' and the children researched about electrical safety. In RE, we started our new topic 'New Life' and the children looked at how feelings will affect our behaviour.

In RE, we have been learning all about Holy Week and completed our assembly about the Garden of Gethsemane. In Maths we have been calculating change from £2, £5 and £10. In English, we finish our comparative poetry about the heart and start our persuasive writing topic about children working down the mines. In Context, we have written an information leaflet about Victorian schools. In Science, we completed an investigation to see if longer legs run faster.

Sunsets in the style of Kyffin Williams using chalks.

Completed Sunsets in the style of Kyffin Williams

In Maths, we have learnt about multiples, factors and sequencing numbers. In English, we have been writing similes and metaphors about the heart in preparation for a comparative poem. In RE, we learnt about the Concluding Rite. In Context, we wrote to compare the clothes worn by rich Tudors and poor Tudors. 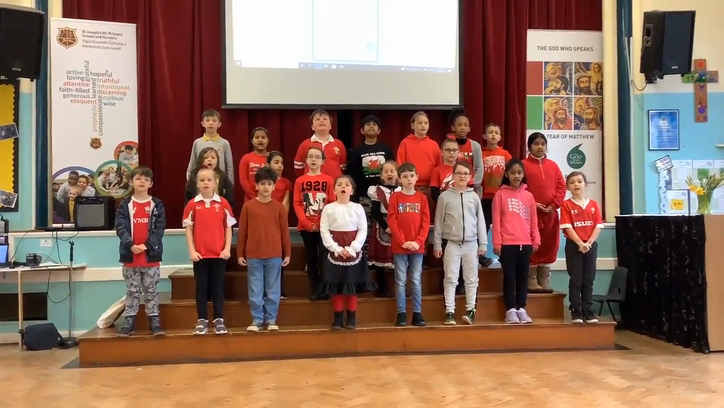 We hope you enjoy watching our performance from this years Eisteddfod. We sang a famous welsh song called Sosban Fach and we learnt a poem about St David’s day by Brenda Williams 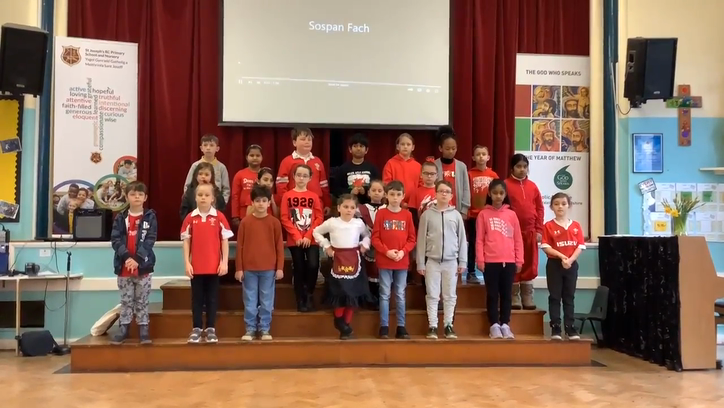 In Maths, we have practiced measuring to the nearest mm and identified types of angles. In English, we completed a practice reading assessment and had a Shakespeare workshop where the children acted out different scenes from MacBeth. In RE, we learnt about the Penitential Act and the children wrote their own Penitential Act. In Context, we created a wanted poster for someone who committed a crime in Tudor times. Lastly, in Science we completed our pre-investigative task where we researched the contents of toothpaste in preparation for out experiment where we find out how toothpaste protects an egg shell.

Please find below our Competitions for this years Eisteddfod. Children are asked to complete as many competitions as the can over half term and return them to school by the 1st March.

On the 1st of March we invite the children to dress up in traditional welsh costume or wear red eg. Rugby shirt or a red tshirt.

The children will be having a small celebration in school on the 10th March where they will be performing songs and poems and the judging of the competitions will take place.

Well done to the children who made their Sacrament of Reconciliation on Saturday. These are some pictures from the service.

In Maths we have completed a temperature problem and completed our personalised assessments. In English, we have written a comparative piece about Jessie's village and New York. In Context, we learnt about Tudor crime and punishment and made a wanted poster. In RE, we created a charter to live by based on Matthew 5:45-58. We also practiced for our Ash Wednesday Mass after half term.

In Maths, we have been learning about negative numbers in the context of temperature. The children have been reading temperatures, calculating the difference between temperatures and ordering them. In English, we have been learning about similes and metaphors and been preparing to write a comparative piece of writing about two locations from 'When Jessie Came Across the Sea'. In Context, we wrote diary entry as if we were a child in a Tudor school. In RE, we started our new topic 'Giving and Receiving'. The children thought of times when they gave and other times when they received.

In Maths, we have learnt about the properties of 3D shape and completed a 'Four Triangles' reasoning activity where they needed to make as many 2D shapes as possible using all four triangle. There were some rules that they needed to follow. In English, we have continued with When Jessie came across the sea. The children have been describing what they saw in a picture of New York and completed activities about the story so far. In Context, we completed a research task to find out what life was like for a child in a Tudor school. In RE, we finished our topic of community by giving reasons for the signs and symbols at a funeral mass and writing a prayer. In Science, we looked at how a plug works, wrote an explanation and a diagram to show what we learnt.

In Maths, we have been consolidating our division and moved on to naming and classifying polygons. In English we wrote our explanation text about the dangers in the sea. We moved on to a new book 'When Jessie Came Across The Sea' and did some descriptive observations. In RE, we continued with our topic 'Community' and we made links between St Paul's advice and our own lives. In Context, we measured and drew an accurate timeline of the Tudor period. In Science, we started our pre-investigative task of writing a biography about the life of Thomas Edison.

In Maths, we have been dividing using a number line. In English, we have planned our explanation text about the the main dangers to the sea. In Context, we wrote a report about the Battle of Bosworth. In RE, we did some research about the groups within our parish community. Finally, it was Group B's turn to take part in Forest Schools this week. They had a fantastic time and made a better fire than Group A.

Welcome back Year 4. In Maths, we have been using the grid method to multiply two numbers together. In English, we looked at the features of an explanation text ready to write our own about the plastic problem in the ocean that links to our novel, Song of the Dolphin Boy. In RE, we started our topic 'Community' and explored the meaning of community and responsibility. We explained the key roles of people within our community. In Context, started our new topic 'A Child of the 30's'. We start by focusing on the Tudors and we created a comic strip about the battle.

Lastly, as you can see from the photos, Group A had lots of fun in their first Forest Schools session. It is Group B's turn next week.

In RE, we completed our topic of Advent and the children were able to explain the reasons for the symbols of Advent. In Context, we created a flowchart algorithm to show how to test if a material is a conductor. We then wrote our own algorithm using repetition and selection. Finally, we had some Christmas fun and games to end a very busy term where the children worked very hard!

In English, we have been learning about time and causal conjunctions. We also learned about fronted adverbials. We have suggested how our feelings towards Mr McFee have changed throughout our novel, 'Song of the Dolphin Boy'. In Maths, we learned about tenths and recorded them as a fraction and a decimal. We moved on to recognising different fractions. In RE, we wrote a letter thanking God for bringing Jesus into the world. We suggested ways we should love one another. In Context, we researched about climate changes and identified the causes. We also complete a science experiment to see whether custard is a solid or a liquid?

In English, we have continued reading 'Song of the Dolphin Boy' by Elizabeth Laird and learned how to punctuate speech correctly. In Maths, we finished our symmetry work and moved on to doubling and halving 3-digit numbers. In RE, we finished our Confirmation topic by writing a poem where the children explained what 'Love' means to them. In Context, we used measuring skills to calculate the distance between our school and recycling centres in South Wales. We also used our IT skills to create different types of graphs on Google Sheets to show total waste.

Unfortunately not the ones with chocolate chips.

Some cookies are necessary in order to make this website function correctly. These are set by default and whilst you can block or delete them by changing your browser settings, some functionality such as being able to log in to the website will not work if you do this. The necessary cookies set on this website are as follows:

Cookies that are not necessary to make the website work, but which enable additional functionality, can also be set. By default these cookies are disabled, but you can choose to enable them below: